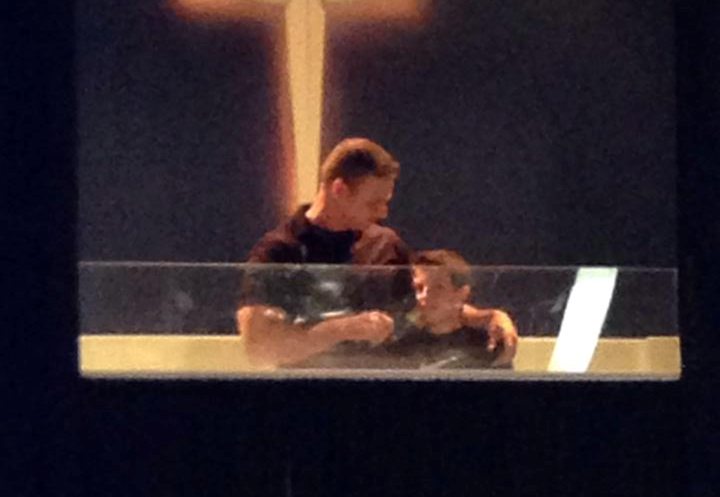 I knew the moment was coming that Wednesday evening. My dad baptized me when I was little, and I was thrilled and honored to have the opportunity to do the same for all three of my children. I was moved to tears several times throughout the day as I thought about the upcoming moment. My children love Jesus, and this was a moment I knew I wouldn’t forget.

But when the opportunity finally presented itself, I was ill prepared. Although I had pictured it in my mind all day long, I had not planned out what I would say. And much to my wife’s chagrin (and my own), my default personality trait is wit and sarcasm.

So, because I had not thought through my words for the moment, I ended up being WAY more lighthearted than I had intended. I asked the kids questions like who their favorite parent was and how old Mommy was before getting to the more serious questions and, eventually, baptizing them.

After my first two children were baptized, the third walked into the pool. That’s when my mind began to whirl as I realized I had not said what I wanted to say. I quickly moved through the moment with my third child, and then stepped out of the pool in a dizzying fog of panic. I had taken it all too lightly and didn’t grasp the opportunity at hand.

I immediately realized it was a moment I’d never get back. My heart sank into my chest. I wanted to crawl under a rock.

My wife and friends did their very best to comfort me. But it’s something I’ll always regret. I had a prime spiritual moment to speak life over my children, and I replaced it instead with wit and sarcasm. As I’ve reflected on this botched opportunity, I’ve realized a few things.

1) My Wife Is Awesome

I already knew this, but she continually proves it to be true. She comforted me with gentle words of assurance. She said I was the Dad my kids knew, and by making them laugh, I likely made it more memorable for them. She helped me sleep that night.

2) I Can’t Live Up To Every Expectation

After working through my regret, I realized that one of the reasons I was immediately so stressed was because I was worried about what the people in the audience may have thought. I’m certain several probably didn’t approve of my lightheartedness during the baptism. I don’t blame them, but I can’t control everyone’s opinion. And if they choose to judge me based on one moment in the spotlight, I cannot control that, either. Not to mention the fact that it was all based on fear alone, since I never actually heard anything negative about the whole thing.

3) Friends Who Pray Are Friends You Should Keep

The day after the botching, I had to appear on two television shows in Atlanta. These on-the-spot interviews in front of a camera and a live television audience are daunting. They call for extreme mental concentration. And I woke up that morning unable to concentrate on anything, as I was filled with regret from the night before. I shared my struggle with a few praying friends, and they immediately chimed in with encouraging words. Over the next two hours, I felt the weight of my burden slowly lift. I know it was because they were praying. Although, on one of the shows that day, I admitted on camera that my Xbox gamertag is “wizardbeef,” so maybe they didn’t pray hard enough.

My son is 9, and my twin girls are 7. I can honestly say that up till this point, I haven’t had a major regret in parenting. But now I do. And this has made me appreciate more deeply the fact that I’ll only have these babies around once. They’ll soon grow up, and they’ll marry, and they’ll have kids of their own. But that hasn’t happened yet. So I’m going to more fully cherish every moment I have left with them. I’m going to hug them a little tighter tonight. I’m going to shut the TV and the phone and the computer off a little sooner. I’m going to linger at the foot of their beds a little longer when I tuck them in. I’m going to cut my meetings shorter and let the board games last longer. I may have missed one moment to speak into their lives, but I refuse to miss another.

5) One Botch Doesn’t Define You

I was reminded by many over the next couple days of the following truth: “Your kids won’t remember what you did once. They’ll remember what you did all the time.” I’m reminded of Abraham, Isaac, and Jacob in the Old Testament. Abraham lied twice about his wife being his sister out of fear. Isaac did the exact same thing. And Jacob stole his brother’s blessing and birthright. Yet, over and over and over again God is referred to as “The God of Abraham, Isaac, and Jacob.” These men had great moments of failure. They had flaws and shortcomings. They weren’t prefect, but they were FAITHFUL. One single act will never define us over the course of our lives. We’re not remembered for our one-time actions, but for our repeated actions. I won’t always get it right, but I’ll always try to get it right. In the end, I hope and pray this is what my kids will remember.

To be honest, I don’t really remember my baptism. I don’t know what my dad said or didn’t say, I just remember that he was there, and that’s all that mattered. I want my kids to remember me not as a good minister or writer or editor, I want them to remember me as a faithful dad. Thankfully I have a few more opportunities to successfully capture that title.

And no matter where you find yourself today, so do you.

Unless you’re a mom, in which case, you might not want the title “faithful dad.”