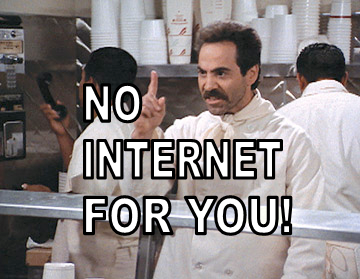 A couple things scare me. I’ve mentioned before that these include 1) the big hairy muppets with crazy eyes that appear to be cut directly from Satan’s body hair and, 2) the Teletubbies. But today I’d like to add a third and even more horrifying thing to this list: THE INTERNET. And learning how to keep your kids safe on the Internet could be the most important thing you ever do.

Now all these things exist at our fingertips, 24 hours a day, 7 days a week. And what scares me the most (I shudder even as I write) is that I see countless kids wandering around with fully connected smartphones and tablets.

A quick question for parents: “Would you ever let your child sleep by him/herself in one of those seedy x-rated bookstores for a night?” That’s exactly what we do when we hand them their fully-connected cell phones and computers and let them roam without supervision. We send them into the x-rated, online store and pray they won’t look (if we pray at all).

I know it’s not easy to clamp down on the Internet because it’s literally EVERYWHERE, but I’m begging you to make an effort. Don’t just blindly hand them the computer or phone and turn the other way. Take the time. Make the effort. Protect your kids. I can’t tell you how thankful I am that I matured just before the Internet came of age. As a wildly hormone-driven 15 year old, I shudder to think of what I might have seen, or searched out, at that age on the Internet, and how it could have gripped me forever.

The ungodly, image-altering, esteem-robbing, addiction-creating things that are available at their fingertips need to be monitored ever so closely. Take every effort to make this happen. There’s no possible way I can shield my children from everything out there, but I sure can try. And in the meantime, I’ll try to form them in such a way that they’ll be prepared to respond appropriately when the opportunity does finally present itself, as you can be sure it will.

My son is 9, and my girls are 7. We haven’t had much of a battle yet, but it’s coming. When it hits, I WANT to be known as the Internet Nazi. And the sooner my kids realize it, the better off we’ll all be.

Here’s a few helpful resources written by others about becoming an effective Internet Nazi:

QUESTION: What have you found helpful for putting limits on Internet usage in your home?