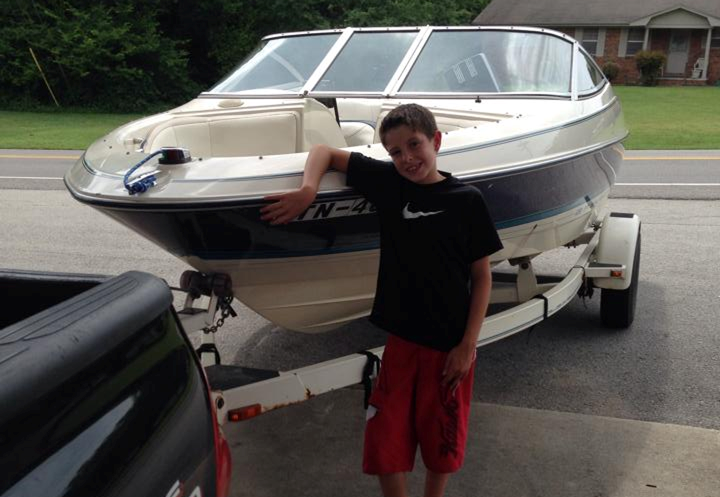 We recently bought a boat. It was a great day as we hooked it up to my truck for the first time and hauled it home. I grew up around boats. Dad was always buying one, fixing it up, then selling it. So now as an adult (whatever that means) I had images of grand boat outings with smiling kids, tan lines, and windswept hair. This image was fulfilled on our first few outings, but then came D-Day.

I readied the boat and was all set to take my wife, our 3 kids, two of my brothers, and my niece out for the first time–8 people in all. We drove down to the local marina and put the boat in the water. Up till this point, everything was running smoothly. I then started the motor and headed toward the dock to pick up the family.

They boarded without a hitch, and off we went toward our grand boating adventure. About 30 seconds into our journey, I suddenly realized I had forgotten to put the plug in the boat.

For you boating novices, most boats have a hole in the back to drain water out after you pull it from the lake. Obviously, you’re supposed to return the plug to the hole before putting the boat back into the water. I did not. And of course, it’s all my wife’s fault.

I keep the keys to the boat and the plug in the same place inside my truck. But on this day, wifey brought me the keys before we got to the marina, so she threw off my usual routine of grabbing the keys and the plug together. Thus the predicament we found ourselves in—NO PLUG, aka, WE’RE ALL GOING TO DROWN AND DIE AND IT’S ALL MY WIFE’S FAULT.

(Drown AND Die? I suppose that’s a bit redundant.)

I knew from my youthful days of boating that if you can go fast enough, a boat will rise out of the water just a bit. If it rises enough, you can drain water out of the plug hole if someone somehow forgets to place said plug into said plug hole before entering water (i.e., me, but wifey’s fault).

So once I realized the plug was out, I gunned it and headed down the river. But, because we had EIGHT people in the boat, it wasn’t getting on top of the water far enough to drain. Instead, we were just taking on more water.

At this point, my wife (who was at fault) and the 4 kids in the boat got wind of what was happening. Wifey is not good in pressure situations. She freezes up like Terrence Howard reading a teleprompter. The panic in her eyes caught the attention of the kids (ages 2-8), and her panic quickly overtook them, as well.

Fear of death was imminent. Tears began to flow as they wondered if they would ever see Jake and his Neverland Pirates again. Their lives were flashing before their eyes. Amidst all the near death wailing, I was trying to devise a plan to keep my boat from sinking.

Once I realized I couldn’t get the water to drain, I turned the boat around and headed for the dock. The boat was getting hard to steer, sloshing back and forth with every turn of the wheel. The situation was becoming dire. I had to try to get to shore and get the plug from the truck as quickly as possible.

I figured I’d slide into the dock as fast as I safely could. My wife would then take the truck keys and run like the wind to the truck for the plug while the rest of us assured the children that they would live to meet their beloved Neverland Pirates.

We pulled up to the dock, the boat more than halfway submerged into the river, plowing water as we went. As soon as we slowed down, wifey jumped out of the boat to get the plug. When she did, I heard a GASP, and an immediate, shrill, shreaking, “OH NO!”

This cannot be good.

“Darren, I DROPPED THE KEYS IN THE WATER!”

“I DROPPED THE KEYS IN THE WATER!”

I tried to calm myself, but my innate calm-er was not working.“THEN JUMP IN AND GET THEM!”

But she couldn’t. Her Terrence Howard syndrome was in full effect. “BUT THE WATER IS NASTY!”

I was polite as I could be with the following … “I DON’T CARE HOW NASTY IT IS. GET IN AND GET THE KEYS. THAT’S MY ONLY SET FOR THE TRUCK!”

While calmly trying to convince wifey to find the sunken keys, I decided I needed to plug the hole somehow to stop the water from coming into the boat. So I got down on my hands and knees and wedged myself into the tiny little box opening in the back of the boat, stretching my arm out as far as I could while squeezing it next to my head, and extended my thumb into the plug hole.

I immediately felt the sharp end of several screws penetrating the skin of my forearm as I wedged my thumb into the opening. And this only made me more calm as I spoke to wifey again. “GET IN THE WATER AND FIND THE KEYS!” She continued to be frozen in fear. Standing on the dock, staring into the abyss.

At some point a friendly neighborhood do-gooder came down from the bar at the marina. I thought our saving grace had come, but my hopes were quickly disspelled. He actually more stumbled down from the bar in a drunken stupor. He heard what was going on and jumped into the water to search for the keys.

After about 10 seconds, he slurred, “Can’t touch the bottom!” and jumped out, never to be seen again.

With wifey (who was at fault) still frozen on the dock, and me still trying to keep my arm from bleeding out, my brother Dusty decided he would jump in. But, only after doing so did he remember that his arm was in a sling and he couldn’t swim. He’d had surgery on a torn pectoral muscle just weeks before, and somehow this fact had eluded him as he dove headfirst into the water.

Wifey and my other brother had to hoist him out.

Finally the other brother, Mike, switched thumb duty with me so I could jump in and look for the keys. So I crawled out of the plug box, bandaged my bloodied arm, received a few pints of blood, and jumped in.

I immediately felt the bottom. It was less than 7 feet deep. Not sure what Mr. Drunken Good Neighbor felt, but I’m guessing his feet were too numb to know where the bottom was.

Although I could touch the bottom, it was covered in a foot of loose mud. For the next 40 minutes I scoured the bottom with my feet, coming up every 30 seconds, gasping for air, then heading down again, praying I could feel the keys with my toes at some point. But I never did.

I did find several rusty beer cans and bottles, a telescoping fishing pole, and an iPhone.

In the midst of my searching, the marina owner got wind of what was happening and found an old plug to put in the boat. Thankfully this released Mike’s thumb and bloodied arm from the box-o-pain, but we were still without my truck keys.

Thankfully Mike had driven his truck over, and happened to have the proper hitch. With the borrowed plug in place, we pulled the boat out with his truck, let all the water drain, then headed to the house to get our van so we could come back and pick up all the little ones who were still recovering from their near death,  we-almost-drowned-and-never-met-the-Neverland-Pirates experience.

When we got back with the van to pick up the family, another guy came out and told me he had a large magnet he often used to find things on the bottom. To quote a 90s movie, “Once again, things that could have been brought to my attention YESTERDAY!” Or at least 2 hours ago. (Who can name that movie?)

So we spent another 30 minutes dragging the bottom of the sludge with a magnet. Once again, a total wash. Unless you count the 3 bolts and screws we pulled up.

The ending was much less eventful than the outing. A mobile locksmith came out and gouged me for $300 to break into my truck and make a new key.

On a completely unrelated note, I have a boat for sale. Anybody interested?

2 Replies to “WE BOUGHT A BOAT! (and then almost died)”